How Long Does Cold Brew Last? Signs It May Have Gone Bad

Cold brew is one of most beloved and common forms of coffee in the world.

You’ve most likely encountered it at the grocery store, local coffee shop, and even in restaurants nearby.

Whether you buy it at the store or order it from your nearby cafe shop, you may wonder how long your cold brew is good for and what to expect out of its lifetime.

While it generally can last up to 2 weeks, there’s a couple considerations to keep in mind to get the most out of your cold brew batch.

Keep reading to find out just how long cold brew can last, and what you need to be aware of as it ages. 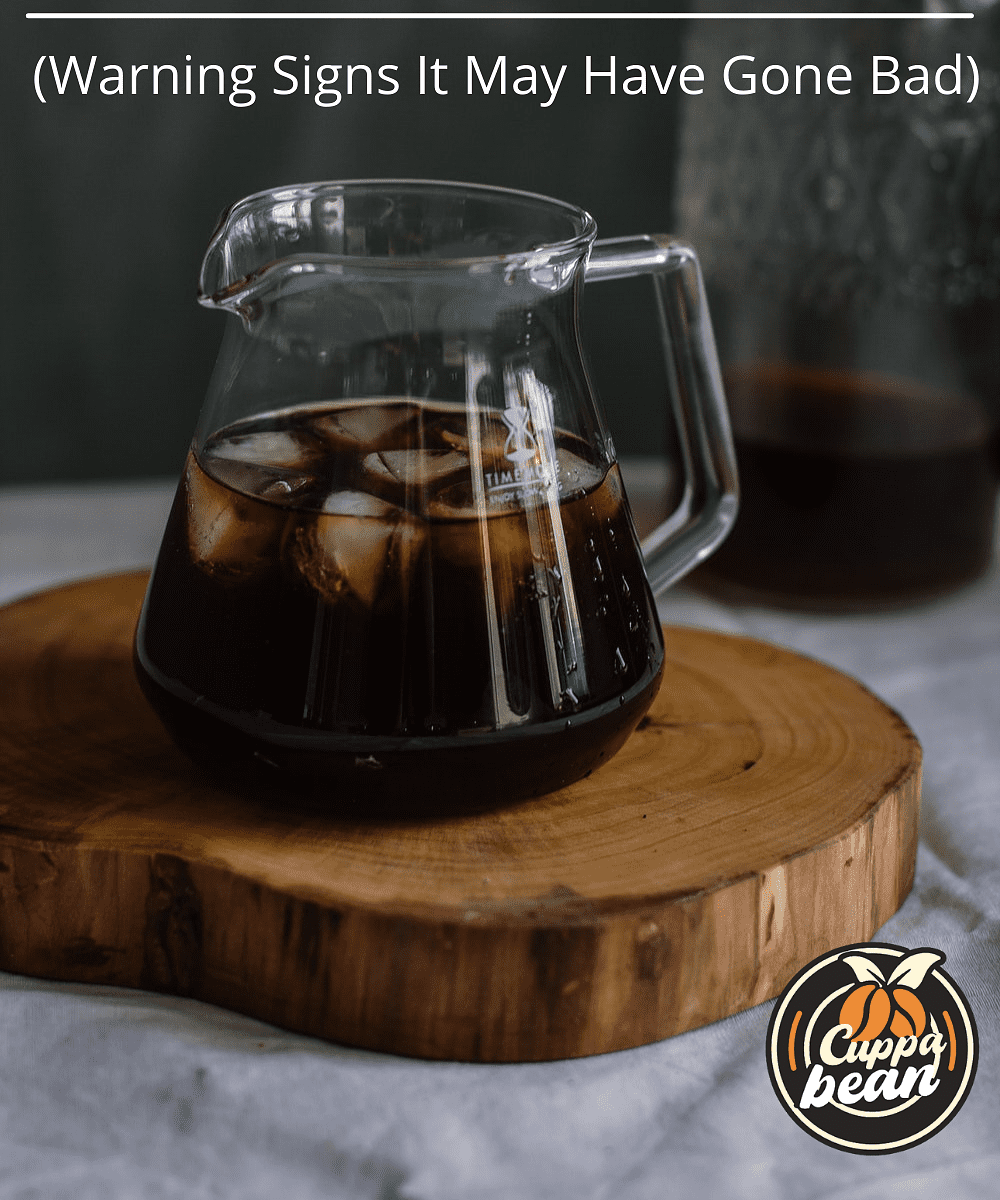 To understand why cold brew lasts longer than standard coffee, you have to be aware of the differences between the two.

Not to be confused with iced coffee, cold brew is a beverage defined by the process in which it’s created and prepared.

Often, it’s brewed by soaking coffee grounds in cold water for anywhere from 12 to 24 hours. This allows plenty of time to pull out the oils, flavor, and profile of the beans.

Cold brew even has more caffeine than iced coffee because of the amount of time it’s allowed to steep for.

So, back to the question. How is it that normal coffee and iced coffee go bad after a couple hours, but cold brew lasts so long?

The answer lies in the fact that cold brew becomes an undiluted concentrate since it brews for a much longer time than normal coffee.

Basically, it brews longer and is therefore a stronger compound than normal, quickly brewed coffee.

Again, this brings a number of benefits unique to cold brew. The beverage is nearly half as acidic as a normal cup of coffee, taking it easy on your stomach. It also contains twice the amount of caffeine.

The energy boost accompanied by a cup of coffee is why most people consume it in the first place, so imagine a cup of cold brew for a second.

Like all beautiful things in life, cold brew does go bad though. Read below about how cold brew expires.

If you were hoping your coffee batch would last forever… unfortunately no such thing exists. Coffee is susceptible to the same problems as the food you consume everyday: oxidation.

While whole coffee beans can last weeks if stored properly, used coffee grounds should be consumed the same day it’s brewed for maximum freshness and taste.

Cold brew breaks this rule and can last up to 2 weeks if refrigerated properly.

It’s important to note that it does get more and more stale with each passing day that it’s not consumed, until it inevitably expires and is no good but to be thrown out.

Again, cold brew does not escape the oxidation process. All organic material is subject to oxidation – the process of being exposed to oxygen, heat, and other elements present in the air.

For any beverage, whether iced coffee, a latte, or cold brew, your cup of joe begins to deteriorate once it’s met by air. The solubles that give coffee its unique flavor begin to oxidize and stale, like iron beginning to rust.

Remember that you should consume your cold brew as quickly as possible to enjoy it in its freshest state.

If you happen to lose track and keep your cold brew longer than intended, you should look out for a couple signs that your brew has gone bad.

You can consume cold brew with these signs, but you won’t enjoy your coffee and you won’t get the energy boost associated with it.

It’s often better just to start a new batch (using one of these cold brew coffee makers) unless you just really love the flavor of your cold brew. And hey, to each their own.

If you’re looking for a more detailed breakdown of the life cycle of your cold brew batch, you can expect the following:

So How Long Exactly Will Cold Brew Last?

As you can see, the answer isn’t quite so black and white. It’s subject to how you like to enjoy your coffee, why you drink it, and how far you’re willing to go despite losing some benefits of fresh coffee.

To officially answer the question, cold brew can be consumed up to 14 days after it’s been steeped. It’s recommended that you consume within 7 days, though the first 3 days are the richest in flavor and caffeine.