Breville Oracle Touch vs Barista Touch 2022 – Which is Better?

Breville is one of the most trusted names in the coffee-making industry, favored by many coffee shops for its espresso machines’ ruggedness and performance reliability.

Two of Breville’s most celebrated espresso machines are the Oracle Touch and the Barista Touch.

Knowing the difference between the two can help you make a better decision about which espresso machine to bring to your family or the office. 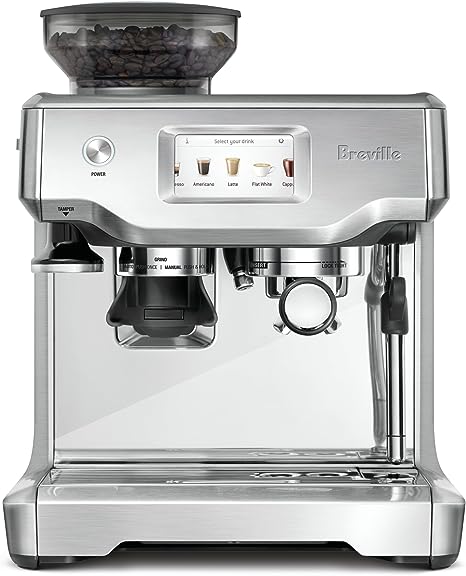 Breville Barista Touch Espresso Machine
4.7
With its reliable 5-coffee style programs and clean aesthetics, the Breville Barista Touch is perfect for the coffee drinker who wants straightforward, barista-quality espressos. It features a single boiler design and enough bean hopper and water reservoir capacity to satisfy a small office’s coffee cravings.
CHECK PRICE ON SEATTLE COFFEE GEAR CHECK PRICE ON BREVILLE.COM
You can support us by making purchases from our links. We may earn commissions from it, at no additional cost to you. 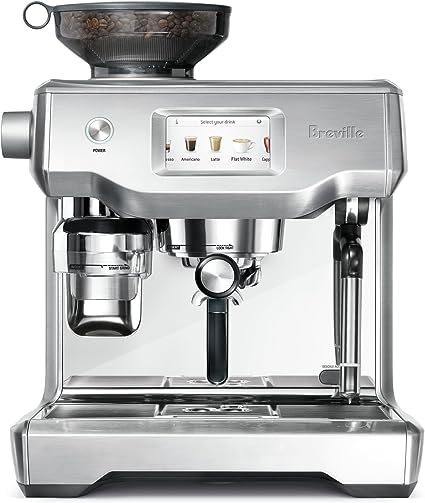 Breville Oracle Touch Fully Automatic Espresso Machine
4.5
A favorite of professional baristas everywhere, the Breville Oracle Touch offers enough customizations to one’s coffee that can wow even the most serious of coffee fanatics. It has a dual boiler, programmable start function, and a reliable over-pressure valve for optimum coffee extraction.
CHECK PRICE ON SEATTLE COFFEE GEAR CHECK PRICE ON BREVILLE.COM
You can support us by making purchases from our links. We may earn commissions from it, at no additional cost to you.

The difference gives the Oracle Touch the edge in making espressos and espresso-based drinks. It allows the machine to extract coffee flavors while steaming or heating milk simultaneously.

The coffee maker also allows for the fine-tuning of the temperature setting. It empowers users to have exceptional control over their drink characteristics.

The Oracle Touch also has the Triple Heat System, including an heat exchanger-integrated steam boiler, a digital PID control system, and a PID-controlled brewing group head. These components work to deliver fast and precise coffee drinks without sacrificing barista-quality.

The Breville Barista Touch has a 67-ounce water capacity, sufficient to produce about 60 to 65 espresso shots. On the other hand, the Oracle Touch can accommodate 17 more ounces of water than the Barista Touch, delivering more espressos to more people.

The material used in the water tank’s construction is also different. The Oracle Touch features rust-free, food-grade stainless steel, while the Barista touch has BPA-free thermoplastic polymer. It may be a deal-breaker for people who do not like plastic items.

Coffee drinkers who want convenience can rely on the Breville Oracle Touch to work wonders. It has a programmable on/off feature that users can set, allowing coffee lovers to get their coffee within seconds.

The program does not brew coffee once it reaches the predetermined time. However, it starts the heating process, cutting the brewing process by several minutes.

The Breville Barista Touch does not have this feature, making it quite tedious for the coffee drinker who may be rushing early in the morning.

One of the most important differences between the Breville Oracle Touch and the Barista Touch is its coffee-making performance. While both espresso machines feature five pre-programmed coffee styles and programmable milk texture and temperature, they differ in the level of automation.

The Oracle Touch automates virtually every step of the coffee-making process. It automatically grinds and tamps coffee grounds to ensure precise measurements. The only thing it requires is for the user to set the 58-mm portafilter and secure it in place. The machine does the rest.

Another advantage of the Oracle Touch over the Barista Touch is the over-pressure valve. The system limits the espresso maker’s Italian pump pressure to only 15 bars, preventing scorching the grounds and avoiding bitter flavors in one’s espresso.

The Breville Barista Touch does not have these features, requiring users to activate the grinder and manually tamp the coffee grounds before setting up the 54-mm portafilter.

Breville Barista Touch Espresso Machine
4.7
CHECK PRICE ON SEATTLE COFFEE GEAR CHECK PRICE ON BREVILLE.COM
You can support us by making purchases from our links. We may earn commissions from it, at no additional cost to you.

Breville Oracle Touch Fully Automatic Espresso Machine
4.5
CHECK PRICE ON SEATTLE COFFEE GEAR CHECK PRICE ON BREVILLE.COM
You can support us by making purchases from our links. We may earn commissions from it, at no additional cost to you.

Choosing between the Breville Oracle Touch and the Barista Touch boils down to the level of customization one wants from his drink and budget.

The Breville Oracle Touch is suitable for those who require optimum convenience, customization, and perfection in their caffeinated beverages.

On the other hand, the Breville Barista Touch is perfect for beginners and seasoned coffee drinkers who may have a limited budget or do not need highly customized drinks.

Cuppabean
Charles is the author and managing editor of Cuppabean.com. A self-admitted coffee addict, he drinks 2-4 cups of coffee a day to get his fix. Read more about the site here.

Affiliate Disclosure: As an Amazon Affiliate, we earn from qualifying purchases made from our links, at no additional cost to you. Read our Privacy Policy here.